Hero Kindsword here. I am the new translator for Wiro Sableng, alongside with my partner, Wildhammer. We contacted MadSnail a while back to take over the translation of WS from Elhessan, and this is the first official post from us.

We will be releasing a total of 5 chapters per week, each on the weekdays. Hopefully we will start to do sponsored and/or Patreon after a week or two, while stockpiling chapters in prep. Please support this novel from here on out. It’s a very interesting series and we hope you’ll enjoy it! Next chapter will hopefully be out in an hour or so after editing

Please post any suggestion/typo/comments below! As well, I changed the numbering system into Book x Chapter x considering the huge number of books in the series

TL Note: Considering the size of the “axe”, we decided to change it into “hatchet” instead. Please see the crazy ancient original artwork below. Alrighty, enough chattering. Here Goes! Enjoy! 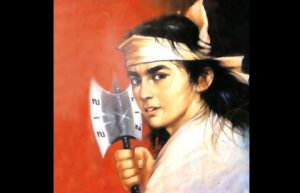 Old lady Sinto Gendeng lunged forward. The hatchet in her right hand swoop here and there performing the “Madman Hitting Flies” technique. When Wiro Saksana executed that technique using a kris (TLN: https://en.wikipedia.org/wiki/Kris), it was amazingly deadly and now it was the technique creator herself performing the technique, thus its force was beyond measure!

The hatchet slashed and hacked in such fast speed it was almost impossible to see with bare eyes. The rushing wind fluttered Wiro’s clothes. This wind was not just any ordinary wind because when it scrapped one’s skin it caused acute pain like blister! And with every move, the mouth of the dragon head at the end of the hatchet’s hilt constantly produced a buzzing sound of swarming wasps!

In a blink of an eye, Wiro Saksana was covered by strokes from that two-headed hatchet. His eyes and skin were stung by the sharp roaring wind.  His ears were deafened by the blaring sound coming out of the mouth of the dragon head carving at the hatchet’s hilt.

Wiro shouted fiercely. His body flickered and vanished instantly. His arms and legs flailed here and there, dodging and striking his master’s seemingly unguarded sections. But how could he be able to deal with such strange mighty weapon? Moreover, the weapon was in the hands of Sinto Gendeng who was using the “Madman Hitting Flies” technique in its consummate form. Soon, the youngster was heavily cornered. If he lowered down his defense even for an instant, his waist, abdomen, chest or throat would be cleaved by the hatchet’s blade. It was only because of relying on his light body skill that Wiro Saksana was able to dodge the double-bladed hatchet’s hacks and slashes. Wiro repeatedly lashed out his inner-powered punches, but the wind of his punches was blocked and even dispersed by the sharp wind rushing from the weapon in his master’s hands.

Yet in that very second, his master’s right leg did a downward sweeping movement, launched to Wiro Saksana’s head. Inevitably this youngster was forced to drop and roll on the ground. Thus the first mighty technique ended.

“Here comes the second stance, Wiro!” she said. She streched her legs widely. Her body slightly leaned forward with the hatchet in her right hand held straight in the direction of Wiro Saksana. From under her black robe Granny Sinto Gendeng pulled out a black object which glistened in the sun. Wiro could not confirm what object was in his teacher’s left hand. It could be a lump of iron, or perhaps a rock.

Suddenly, Sinto Gendeng hit the object in her left hand to the hatchet’s blade. Sparks glowed. A second later, great flame was bursting to the direction of Wiro Saksana!

The youngster was greatly shocked. He shouted and jumped. The bursting flame passed beneath him, causing searing pain in his legs and when he glanced back he could see how the bushes and trees were burned by that blast of fire!

Even before his feet touched the ground, Sinto Gendeng had already attacked the youngstera second time. Flames flashed once more. Wiro rolled on the ground, avoiding the flame with a flick of his hand. The ground that was struck by the fire from the mighty hatchet became blackened. Wiro stuck his tongue out. Before he could control his breath, Sinto Gendeng’s right and left hands repetitively performed the technique again. Half a dozen of that flame pursued him from six directions!

Wiro gave a mighty cry. He roared and yelled. His hands were raised high upward. His body jumped here and there, his mouth mumbling. The icy wind technique that he released could only withstand the waves of flashing flames but could not completely obliterate the heat!

Wiro Saksana was overwhelmed but he could still managed to keep his wit! His terrible roar reached the sky. Wiro Saksana escaped from the range of flashing flames and rolled over on the ground with lightning-fast speed to where Granny Sinto Gendeng stood.

As he was rolling over, Wiro released two forceful punches. One hand performed the “Monkey Throwing Fruits” technique and the other performed the “Sun Strike” technique! Sinto Gendeng had no choice but to dodge sideways. The second stance thus ended!
Covered in cold sweat, Wiro Saksana stood up. Behind him, the flame still burned the bushes and leaves. He saw his master standing motionless. The object in her left hand turned out to be a flint and had now been put back under her black robe.

“This is the last stance Wiro…!” Granny Sinto Gendeng said.

The youngster knew, if the first two stances were this ridiculously powerful then the third or last stance would definitely be even more terrifying. Therefore he was much more vigilant and careful now. His pair of black eyes were sharply focused to see forward.

Sinto Gendeng held the hatchet in reverse grip. She drew the dragon’s mouth closer to her mouth while her fingers closed the six holes on the hatchet’s hilt. When Wiro Saksana was still predicting his teacher’s move, he heard the sound of a flute! It turned out that it was the hatchet releasing that sound which was blown by Sinto Gendeng!

The echo of the flute was initially slow, smooth and soft, mesmerizing Wiro Saksana. Then the sound became louder and the blood vessels in Wiro’s body felt like they were stabbed. His blood ran uncontrollably, choking up inside his body. His vision blurred and he felt painful headache!

His waist bent forward. Suddenly a faint, clear memory flashed through his mind. Quickly this youngster closed his sense of hearing. It was very difficult at first, because at that moment his two ear canals were already bleeding!

Mustering the remaining energy in his body, the youngster could finally close his sense of hearing. As soon as he could no longer heard the sound of the flute, slowly he could regain his physical and inner power. However, the sensation which pierced his blood vessels had not disappeared. Therefore, he controlled his blood flow and breath. He gradually overcame the effect of the sound of the flute. And when he felt he had the strength for counterattack, this youngster played feint, pretending to collapse unconsciously. As soon as his right hand hit the ground, however, he immediately grabbed some sand and toss it in the direction of Sinto Gendeng!

Hundreds of grains of sand filled with “Whirlwind” technique roared to the mouth of the dragon and the holes on the hatchet’s hilt, hundreds more grains was attacking Sinto Gendeng’s face. The elderly lady kept her mouth away from the dragon’s mouth and immediately blew forward. The sand rushing to attack her fell back to the ground! Simultaneously, Sinto Gendeng put her hatchet back under her clothes. That meant the third terrifying technique was over.

Wiro stood up, breathing heavily. He kept his eyes fixed to his teacher, watching her movements. Though Granny Sinto Gendeng said she would attack him using only three techniques, it was not impossible that the granny would attack him again! But he saw Granny Sinto Gendeng just stared at him. Wiro scratched his not-itchy head out of confusion. For a dozen of years he had studied martial arts and martial skills, only today he learned that Granny Sinto Gendeng had in her possession a weapon in the shape of an axe that was so bizarre, which turned out to be a very formidable weapon! For so many years, it was just that day that his teacher attacked him using exceptionally deadly techniques. She also executed the techniques without her usual laughs! He then connected her teacher’s behavior with the song she sang today! There were a lot of weird things that Wiro saw today.

Suddenly, he saw the formidable granny flickered. Wiro immediately prepared himself. There was a neighing laugh that sounded like a horse’s voice.